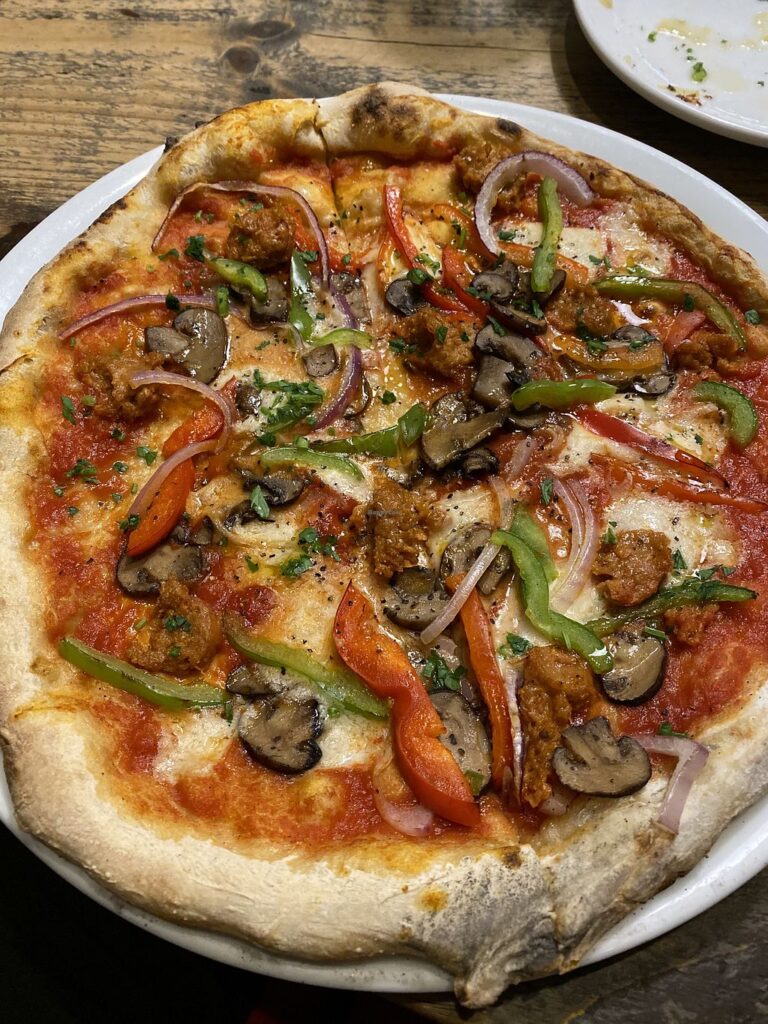 If you’re a fan of pizza like us at Dave’s Cooling and Heating, then this one’s for you!

There are plenty of pizza options in Frederick, but we want to tell you about the two very best ones and they both could not be more different than each other.

What’s the point of listing every single pizza option in one article? You can just Google that, select the maps option, and you will get the entire list.

But that’s why we put two options for best – because they both represent the best American style pizza in Frederick. And the other is the very best actual Italian or Neapolitan style pizza.

The American style pizzeria’s tend to be on the heavier side with a thicker, pan style dough.

In our experience, even many pizzeria’s who specialize in NY style pizza get the crust too thick for our taste.

You might end up feeling a bit lethargic after or even sick due to the carb, cheese and grease overload.

We picked Pistarro’s as the best Italian style pizza in Frederick. Why? Because they’re the real deal. They make it the Neapolitan way – which is the original way!

Pizza Napoletana, or Neapolitan pizza, is a style of pizza that originated in Naples, Italy.

Simple and fresh ingredients are used to make this form of pizza: a basic dough, raw tomatoes, fresh mozzarella cheese, fresh basil, and olive oil. And not overloaded with a crazy amount of toppings or cheese.

In fact, there is even a law in Italy that dictates what ingredients an authentic Neapolitan pizza should have. The flour must be “00” or double zero caputo flour…the tomatoes from San Marzano.

Pistarro’s uses these very ingredients, which they import directly from Italy. They use a traditional dough recipe, mixed in a precise 65 degrees, climate controlled room. Where the dough balls proof or age for 24 hours before baking. (It’s what gives it the light and airy

Not only that, they also make their own fresh mozzarella everyday just like it is made in Naples.

Some pizza places might tell you they import their mozzarella but anyone who has been to Naples knows that what makes the mozzarella so good there is that it is made fresh every morning, and then literally every hour throughout the day!

It’s nice to see someone bring the real, actual tradition back to Frederick from Italy. A lot just import everything, few truly understand the tradition.

Not only that – the volcanic clay oven they use is handmade in Italy.

These are specialized wood-burning ovens that reach temperatures of up to 1000 degrees and cook a pizza in less than 2 minutes flat.

Not convinced? Try the best Neapolitan pizza in Frederick for yourself. 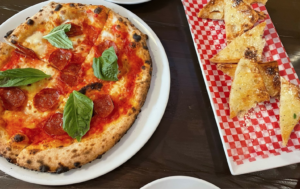 Want something heartier than an Italian style pizza or something much bigger that you can share with another person or a crowd? The above option is usually a one whole pie per person – that’s how they do things in Italy.

Or sometimes you just want a cheese, meat, dough and veggie fest. Life is hard, and sometimes there is over-the-top pizza.

But the very best option in our opinion that is actually well represented in Frederick, MD? And by far the most American…Chicago Style Pizza!

Chicago Style pizza is quite different from the normal pizza – it’s more like a back-wards, deep dish, casserole pie. If that makes any sense…

Let me explain: It’s created from a robust oil-enriched crust squeezed into a cylindrical pan, filled with sliced mozzarella first , and then topped with meat or veggies. And then extra chunky tomato sauce right on top. Backwards.

It’s perfect to share with a bunch of friends because most people can only eat one or two slices. They’re that filling!

So where do you find Chicago Style in Frederick?

Look no further than Rosati’s which is a 5 generation pizzeria that first opened its doors in a Chicago suburb back in 1964.

They’ve grown quite a bit into a larger chain but the commitment to quality and making authentic Chicago deep dish or  Chicago stuffed crust style is still high and alive. 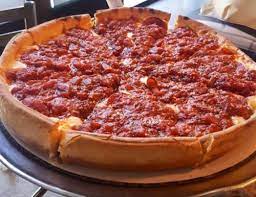