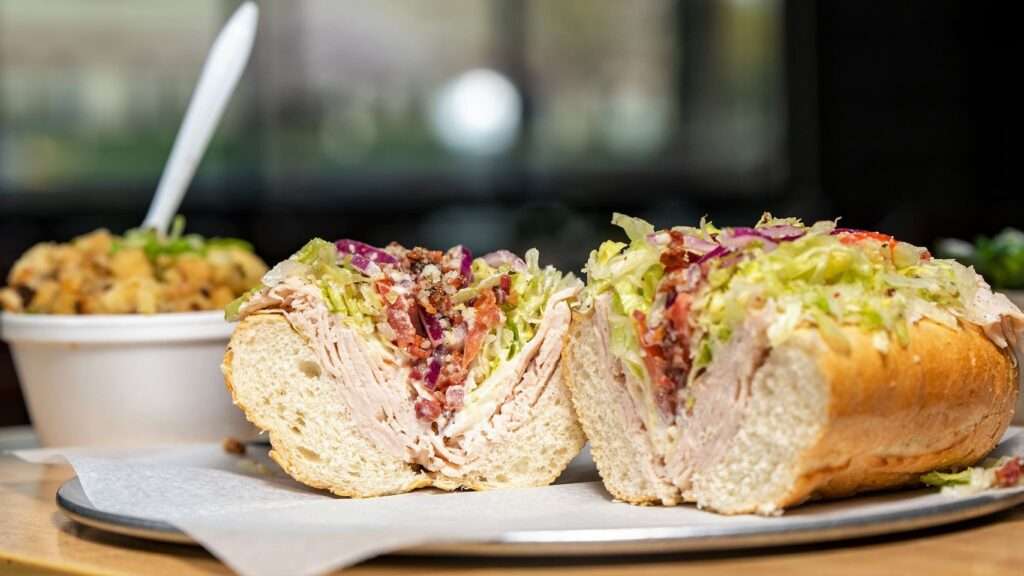 We at Dave’s Cooling and Heating picked three of the best sandwich shops in Frederick, MD! Over the years, Frederick, MD has become home to many fantastic and unique restaurants and cafes. From fine dining at Brian Voltaggio’s restaurant to vegan donuts and even the instagram famous birria tacos, you can find almost anything in town these days that you might find in a larger city.

The humble sandwich might not have been invented in America but it was certainly perfected here. Unlike Europe (where it was actually invented), our sandwiches are not just a small snack but a full on meal with a lot of meat and cheese stuffed between the bread.

Frederick actually has a lot of sandwich shops but we decided to narrow the list down to just 3 based on several factors – such as bread they use, the meats and other fillings, and overall taste.

Each being unique but great in its own right, we could not rank one higher than the other.

This sandwich shop in Frederick is privately owned by a family hailing from San Francisco, California.

If you’ve ever been to San Francisco and visited any sandwich shops such as Deli Board or Ike’s…this place definitely reminds you of that!

Originally opening in Washington DC, the owners eventually relocated to Frederick, MD where they bought a two story business building and turned it into a sandwich shop with a craft beer and wine shop next door.

These sandwiches are HUGE and just one could certainly feed two people. The pack on the meat, cheese, and other toppings.

They have a great craft beer selection as well as their infamous side dish – exploded potatoes which are sort of a chunky mashed up skin on potatoes with bacon, cheese, and herbs. Be sure to get these! They also have salads and other appetizers too!

They have over a dozen sandwiches on their menu – both hot and cold. Our favorite though?

“The Trans Am” which according to their menu is an improved version of the classic Club Sandwich – Sliced Homemade Turkey Breast, Provolone Cheese, Shredded Lettuce, Sliced Tomato, Mayo, Thick Cut Chopped Bacon, Red Onion, Caesar Dressed with Aged Romano, Parmesan and other seasons.

Chap’s Pit Beef is a barbecue sandwich shop originally hailing from Baltimore. Their charcoal roasted pit beef has garnered quite a lot of attention over the years.

It happens to be Guy Fieri’s favorite sandwich to which he said it’s  “The Best Thing I Ever Ate” on “Diners, Drive-ins, and Dives.”

Additionally, Chaps has been in Anthony Bourdain’s “No Reservations” and Adam Richman’s “Man vs. Food”.

The New York Times, Washington Post, Huffington Post, Southern Living, Garden & Gun, and Saveur have all written about them, and Zagat dubbed them “Carnivore Heaven.”

They have quite a few sandwiches on the menu with different types of homemade meats – their famous pit beef, corned beef, ham or turkey for example. Or they have options that combine some of the meat offerings – all being very, very good.

Our favorite sandwich at Chap’s Pit Beef? If you have not been before, you should stick with their classic pit beef sandwich! Afterall, it’s what made them famous and why every food publication is talking about them.

Otherwise, we love the “52 Chaps Special” which combines their famous pit beef with corned beef, ham, and American cheese!

Last on the list, but certainly not the least…is South Market Sandwich Company.

The owner and chef has over a decade of sandwich making experience – and it certainly shows!

The menu is split between cold sub style sandwiches and gourmet “grilled cheese” sandwiches which also have plenty of meat and not just cheese between slices of thick homemade sourdough toast.

Our favorites? For cold sandwiches, we like “the classic Italian” which apparently took the owner many years of trial and error to perfect.

Otherwise you must try the gourmet grilled cheese sandwiches as that’s what makes this place different from any other in Frederick. Our favorite? “The Rosemary” which includes homemade roasted turkey, monterey jack cheese, rosemary-parmesan aioli on grilled homemade sourdough.

The other difference between this place and the other two on the list? They also serve some mean breakfast sandwiches!